The college football playoffs have been a massive improvement for college football since it began back in the 2014 season. We have 4 teams instead of just the top 2 competing for a title and already in just the few short years it has been implemented it has already given us magical moments. From Ezekiel Elliot having a monster performance for Ohio State, to Deshaun Watson’s game winning touchdown for Clemson, to Tua Tagovailoa coming in the 2nd half and winning in overtime, we have had some awesome moments. But one of if not the biggest complaint fans have is 4 teams isn’t enough. That in order to have true “playoff” you need to have more than 4 teams. When these complaints were first brought up, coaches and administrators brushed that idea off saying the new playoffs were fine as they were. Well now it looks like the tides may be changing.

A new report from Brett McMurphy of Stadium shows that 88% of FBS athletic directors want to see expansion for the college football playoffs. The current college playoff format contract of four teams is set to expire in 2025. So while we still have a couple of years before any actual changes can happen, athletic directors overwhelmingly want to see more teams in the playoffs. The survey conducted by Stadium shows that 72% of AD’s would like to see an 8 team playoff compared to only 12% who want to keep the current format. As to what 8 teams should qualify for the playoffs, once again a pretty overwhelming 66% believe in should be the Power 5 school champions, 2 at large teams and one Group of 5 team.

I’m all if favor of this for a couple of reasons. First, four teams just isn’t a true playoff. You are never going to have a March Madness type of tournament with college football we all get that. But 8 teams I think would be the perfect sweet spot in terms of the right amount of teams that would make up a true playoff. Plus, I think it’s fair to have a Group of 5 member compete in the playoffs. We all know about UCF and their undefeated campaign is a main reason why the Group of 5 is being included. Now I know some of you may think “those teams wouldn’t stand a chance their is no point in letting them in!” How do you know they wouldn’t “stand a chance?” You don’t know if you don’t even give them a chance. If you want the idea of all teams believing they have a chance to win a national championship, then you need to allow a Group of 5 team a seat at the table. Maybe they do get blown out. But they deserve to have a chance to prove they can compete with the Power 5 schools.

So how would this 8 team playoff format look like if it happened in 2019? Well Stadium provided a potential preview of what that could look like. 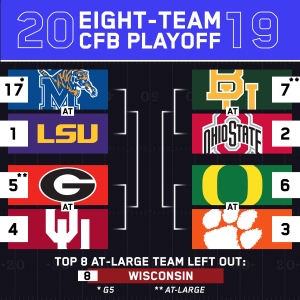 So your Power 5 champions in this case would be LSU, Ohio State, Clemson, Oklahoma and Oregon. The two wild card teams would be Georgia and Baylor as at they were the two highest remaining schools. Finally the Group of 5 representative would be Memphis as again they were the highest ranked school in that category. I mean look how interesting these games would be! Georgia vs Oklahoma would be a fantastic game, Baylor against Ohio State would be close contest, Justin Herbert of Oregon vs Trevor Lawrence of Clemson would be a great QB battle you get the idea. Even in the expanded playoffs you are still getting high quality playoff games! Plus there would be more emphasis on winning your conference as it will mean way more than it currently does. Also at the end of the day, that means more money. More playoff games means more ticket sales which means for television revenue which means millions of more dollars to go around.

I don’t think it’s going to be a matter of if but a matter of when the playoffs are expanded. If 88% of athletic directors want expanded playoffs now in 2020, imagine how even bigger that percentage will be come 2025. We still have a few years under this current format, but by 2026 expect to see 8 teams competing in the playoffs. That’s the way it should be.